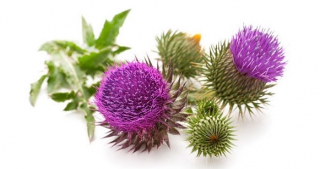 Milk Thistle is one of the most important ingredients in all HoliSnacks Herbal Dietary Supplements and Treats. It is one of very few traditionally used herbs that has been widely accepted not only by holistic and herbal medicine but also by conventional science to have significant medicinal value.

Milk Thistle is one of the most important ingredients in all HoliSnacks Herbal Dietary Supplements and Treats. It is one of very few traditionally used herbs that has been widely accepted not only by holistic and herbal medicine but also by conventional science to have significant medicinal value.

Milk Thistle is a flower in the Aster family. A native of the Mediterranean regions of Europe, North Africa, and the Middle East, this plant, particularly its seeds and roots, has been used medicinally for over 2000 years.

Milk Thistle is a powerful antioxidant. Antioxidants protect us from chemicals in our bodies called free radicals. Exposure to environmental toxins can increase free radicals in the body, which can do a lot of damage to our cells. This is called oxidation and can eventually lead to cancer, heart disease, and arthritis. Milk Thistle protects the liver against harmful oxidation.

“Detoxification is such an important process not only for us humans but also for our pets. We can be feeding our furry loved ones the best foods in the world but pores clogged with toxins will not allow essential nutrients to pass, causing a weakened immune system. A pet’s weakened immune system equals a multitude of problems!” – Rodney Habib, founder of Planet Paws

While we don’t necessarily think of medications as “toxins,” many over the counter drugs and prescription medications can hurt the liver if taken in large enough doses or for long periods of time. Researchers have found that milk thistle can actually prevent or reduce medication induced liver damage. If you have been giving your pet any medication, such as steroids, antibiotics, or even spot-ons or deworming medications, and are concerned about the aftermath of chemicals residing in the body, milk thistle will help flush those out.

Liver disease is more common in pets than you might expect. Certain breeds of dogs (such as Labrador Retrievers, Dalmatians and Great Danes) are more susceptible to liver disease due to a genetic difficulty excreting copper.

It is good to know that if the liver has been weakened due to a bevy of reasons, it is unable to break down toxins. In order to combat allergens, the body produces histamine. The liver plays a role in this process; it removes the histamine from the body. If the liver is weakened and congested with toxins, the liver struggles and histamine builds up in the body, leading to more allergic reactions.

With HoliSnacks, we are eager to create a dietary supplements and treats that help to combat such diseases, illnesses and allergic reactions. We believe that using such ingredients like milk thistle in our products, we are aiming to reduce harmful toxins, free radicals and chemicals from the system of our pets. All of our products are to help to preserve your pets health and aid their healing and cleansing process.

*(sources for this article find in Dogs Naturally magazine http://www.dogsnaturallymagazine.com)